Not that he specifically says “women,” and then goes on to equate *women* disagreeing with gender ideology to HOLOCAUST DENIAL.

Women disagreeing with Steve is akin to fascist conspiracy theory.

Think about this for a second, because I think we’ve become so inured to this by now that we kind of shrug and move on. A man has just equated women’s words with denying that a genocide took place. Women disagreeing with the powers that be is suddenly equivalent to a hate crime.

This false equivalence is the stuff of everyday misogyny. It’s the insidious symptom of patriarchy, that the dissident opinions of women are equivalent to hate, to fascism, to violence. This is what @tehbewilderness described in the rules of misogyny. 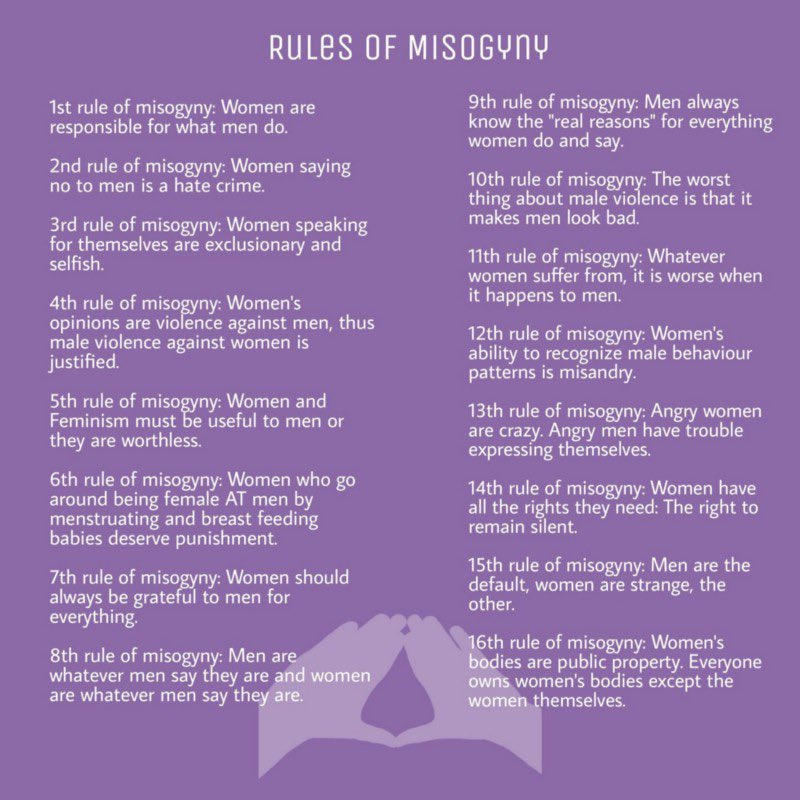 And, as she described in the rules of misogyny, this is the mentality that perpetuates rape culture. Women’s words are hateful, they’re akin to violence. Why can’t these women just be nice?! Be kind? Why do they have to say no? Their no isn’t just inconvenient, it’s cruel!

And if women’s words are violence, then it’s equivalent to real violence. For example, say, oh, I don’t know, male violence against women.

See how that works?

And I think this is why we refer to “peaking” as a thing. Because it isn’t just the moment when a woman rejects gender ideology, it’s the moment a woman realised that gender ideology—and the reactions to our dissidence—are a microcosm of patriarchy.

The gender ideology debate is a microcosm of what happens when women say no, and how a patriarchal society handles that answer.

It shows women that the progress we’ve made, hard won progress, can be pushed back on, can be reframed and quietly destroyed. It shows us that our power is more limited than we first thought—that our “no” has a limit.

It shows us that, if men decide they want to, they can undo all the progress we’ve made—while convincing us it’s in our interest.

And in that way, it reveals the nature of “free choice,” and how trapped we are by patriarchy. And really, that’s the ultimate peaking.