Women are oppressed *by* gender *on the basis* of sex.

How are people so fucking confused? 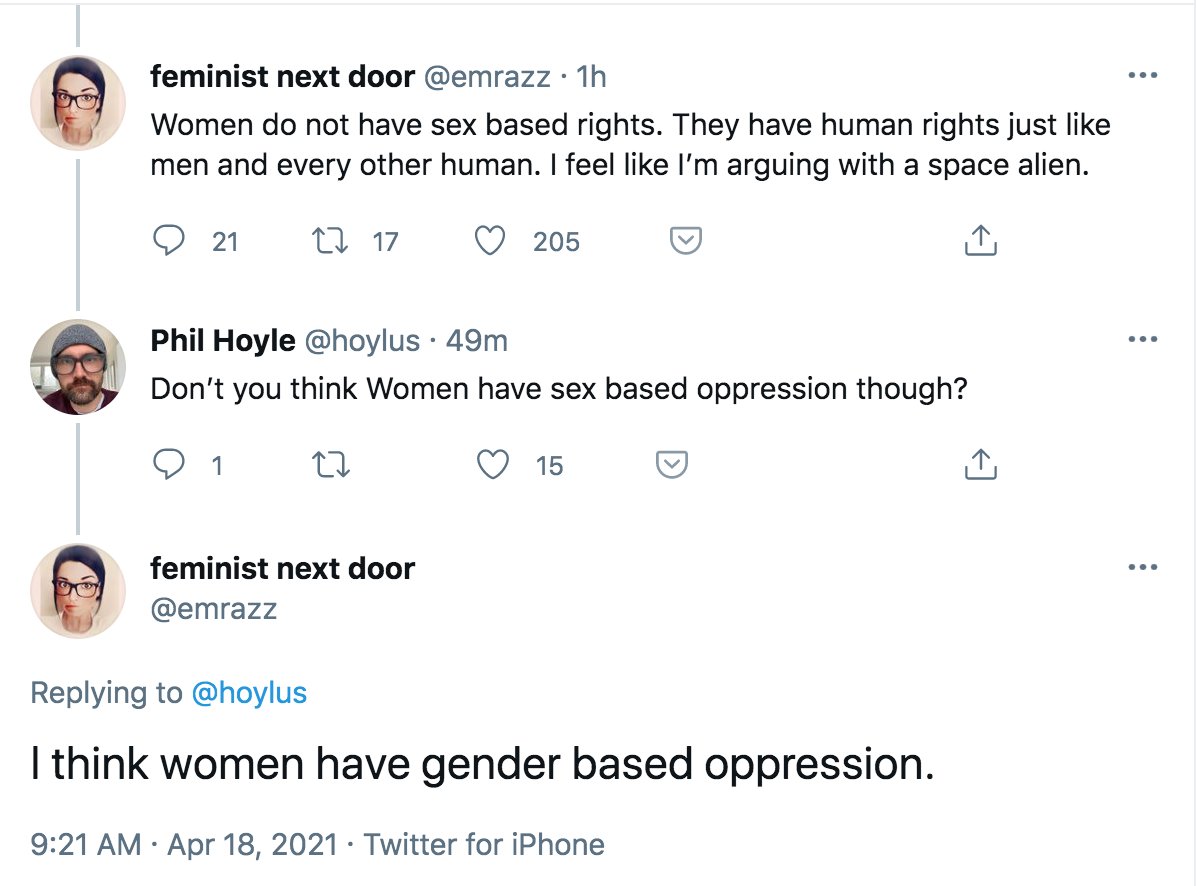 Lets do patriarchy 101 shall we?

Patriarchy is a system of *male dominance.*

The feminist analysis of this situation is that society is structured to serve the interests of males. A significant part of these interests involves female people being positioned as a *resource* for males. This includes being a reproductive and sexual resource, as well as the

That women have certain reproductive capacities, and that men want to have reproductive and sexual access to women is FUNDAMENTAL to why this system evolved, and why men *still have an interest* in maintaining it.

That is, male dominance over women is entirely non-accidentally related to the fact that men want access to WOMEN’S BODIES.

That is, it is SEX-based. And that is why large parts of the system of dominance pertain directly to access to women’s bodies or to controlling women’s

GENDER is the system of sex-based roles AND values, which function to position female people as a compliant service class to male needs.

This works through socialisation, which

rewards female compliance and punishes women who step outside our gender roles. It also then involves the entire structure of male violence, which is not a bunch of ‘isolated incidents’ but is actually an interlocking system for policing women’s compliance. (Men don’t necessarily

understand it in this way, they are acting on the basis of inculcated entitlement to women and ‘aggrieved entitlement’ when they don’t get what they think they are entitled to).

Frankly, I do not even know what you think it means to say women’s oppression is ‘gender based.’

Gender is the *mechanism* of women’s oppression.

It harms women *whether they conform to it or rebel against it.* And female people are subjected to this mechanism *because they are female, and because the mechanism aims at converting them into a resource for males.*

It is true that other GNC people get caught in this mechanism, because the mechanism polices both masculinity in males and femininity in females, but that is a side-effect of a system structured by male interests in controlling female *bodies.*

I really really want people talking about ‘gender based oppression’ to explain:

1. What this actually means with respect to the oppression of female people? Are we oppressed because of how we do gender? Is there a way to do gender that would stop us being oppressed? Can we stop

ourselves being the target of male control by doing it differently? Isn’t this victim blaming?

2. Why women are oppressed. Because I have seen no evidence you have a theory of patriarchy that makes any sense.

3. Why gender norms evolved and what function they serve.

Because the bottom line is that you are telling us that we must consent to a form of ‘feminism’ that makes no analytic sense whatsofuckingever, and moreover, looks a great deal like you have somehow decided that the function of feminism is to centre the needs and interests of

people who are not female, and for women to compliantly perform their service function, which, um, would actually be nothing more that a performance of the core of patriarchal femininity.