This is really worth a watch – time well spent. So basically queer theory is just more ignoring the elephant in the living room, with a large topping of sesquipedallianism. “If people don’t mention power structures, they will just disappear.” What a gift to oppressive elites.

This is really worth a watch – time well spent. So basically queer theory is just more ignoring the elephant in the living room, with a large topping of sesquipedallianism. “If people don’t mention power structures, they will just disappear.” What a gift to oppressive elites.

It’s like the old attitude of not talking about DV or incest because it would bring shame on the family, but with ‘discourse’. By claiming that the category, and not the power relations between categories, is the problem, it removes the language required to speak truth to power.

Sexism, racism, homophobia and classism wrapped in shiny ‘progressive’ packaging. I’m not big on conspiracies, but I’d say the Left has been well and truly hacked.

Oh, and under all the verbiage, it comes down to:
norms bad
transgressing norms good
No analysis of the content of the norm and whether it actually benefits people. Norms especially bad when they restrict dick.
And so we get defences of paedophilia, sadism etc as transgressive.

Children are socially constructed and perfectly capable of consenting to sex – no analysis of the power a 40-year-old male has over a four-year-old.

We need to kick this vomit the fuck out of feminism, actually.

An additional remark which Susan Cox makes toward the end of the video also struck me ; it is that colonists don’t merely invade by force and keep colonised peoples oppressed by violence. They destroy the culture, customs, religion of the colonised peoples.

This, of course, is precisely what QT transactivists are doing to women, lesbians, and to a lesser extent gays : destroying the language we use about ourselves, our understanding of what makes someone a woman, our freedom of association, our social position, the defn of feminism.

We are expected not only to adhere to transactivists’ demands on our behaviour, but to conform internally to their ideology at the expense of our perception of ourselves. This is colonisation.

Susan Cox thinks that queer theory began with good intentions, and that the questioning of why norms are the way they are and the playing with the margins is actually important, which I think is fair.

But again, because the power imbalance between men as a class and women is ignored, and the categories attacked instead, the result is to strengthen that power imbalance. This is obvious when you see that ‘woman’ is being completely deconstructed while ‘man’ is largely intact.

So while queer theory may have had some positive theoretical intentions, its real-world effect has been to produce the worst attack on women’s rights in a century, and extraordinary levels of misogyny. It is a failed theory, has no place in feminism, and should be abandoned.

@Dr_Kate_Newey ‘s response below is extremely insightful and worth the read. In fact the historical progression to this point is fascinating, as it can be read as an arc of male resistance to, and then colonisation of, feminism:

Roughly: 60’s and 70’s – emergence and growth of 2nd wave and the radical understanding that we cannot reform patriarchy; we have to liberate ourselves from it.
80’s – start of open backlash against feminism
91 – publication of Faludi’s Backlash

92 – Publication of Somer Brodddrib’s Nothing Mat(t)ers, in which she describes the attack on feminism presented by postmodernists and notes that men have often attacked feminism, but that this is the first time they’ve called themselves feminists while doing it.

So this period – early 90s to late oughties? not sure of dates – represents the colonisation of feminism by men. We’ve gone from Women’s Studies, Mary Daly and Off Our Backs to male ‘feminists’, ‘Gender Studies’ and ‘Gender Equality’.

So this is the colonisation and conditioning of the feminist movement to be subservient to men, and the marginalisation and ridicule of radical women. In other words they defanged the organisations which they knew would oppose them as a first step.

And in Queer Theory and transactivism, we have the piéce de non-resistance, the colonisation of womanhood itself, and the dictatorial re-definition of woman as feminine by men claiming a deeper understanding of womanhood than women, ludicrously spun as ‘feminism’.

And the captured assets (3rd wave ‘feminists’) meekly agree, because by colonising feminism, men have managed to sever the generational tie with second-wavers, who would have educated the younger women and told the menz where to shove their shit.

3rd-wavers are also thrown cookies to please them and make them think they are free – a few political and academic positions, a bit more sexual freedom (as long as they worship dick), a bit more social space. Stockholm Syndrome.

And of course men have colonised transsexuals as well, so the other likely source of opposition has been defanged and marginalised too.

I don’t know why we’re even paying lip service the the idea that this is progressive any more. It’s a blatant male grab for complete control over women. If I found out these PRAs were in cahoots with the right-wingers removing women’s repro rights, I wouldn’t raise an eyebrow.

Unfortunately they miscalculated, because they don’t understand women. Radical feminism didn’t die, it merely went stealth and became stronger as a result – and here our lesbian sisters, who have no use for men and no reason to pander to them, really kept the flame burning.

Radical women took one look at this little lot and went: “In your dreams, mate”. At first we were shouted down by everyone, but transactivists then started hurling misogynist abuse and threats at us. They were overconfident; they thought they had total control of the discourse.

Instead, as their behaviour became more and more blatant, women who had previously supported them began to have doubts – and discovered that there was a network of women with a crystal-clear analysis of what was happening.

The frenzied eagerness with which lefty men climbed on the abuse bandwagon also outed them as violent, controlling woman-haters. The internet meant they couldn’t conceal it. There is no possible way to doubt men’s hatred for us now.

So the net effect has been to revitalise radical feminism and recruit thousands and thousands of women – I would say it is more vital now than in its 2nd wave heyday, and growing rapidly, because misogyny is now so blatant that men are doing our consciousness-raising *for* us.

Wokebeards, transactivists, MRAs, right-wing forced-birthers, the sex and surrogacy industry – really, why even bother to make a distinction? This is not a progressive era – it’s hyper-patriarchy on crack, which is entirely consistent with a slide towards fascism.

We’re in a war for our survival, and I think the more of us who acknowledge that, who recognise that this is not an aberration but a feature of the society we live in, the better our chances of dealing with it. This society cannot continue.

If we can uproot it (the weed of misogyny is hardy and deep-rooted, so not easy) and replace it with something pro-woman, funnily enough I suspect we’ll have a much better chance of dealing with climate change too. I think the survival of the species might well depend on us.

Germaine Greer, we now know how much men hate us and what we’re dealing with. Once again, thank you, transactivists. You’ve been an education.

A final note – Frye on access is an important read. Spaces are a battleground precisely because access to them is a sexist attack on our autonomy. I think we need to be more willing to say : “No, you may not have access to our spaces. Because we say so. No reason required.” 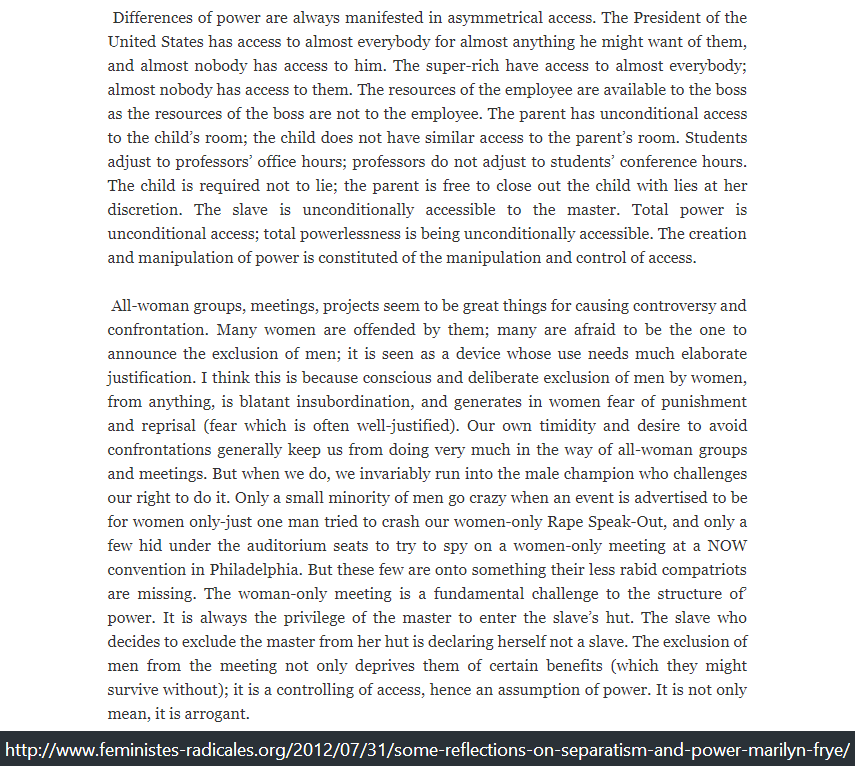