So, about Grace Lavery. A little epistolary tale on egregious narcissism….

In 2018, a Queer Studies professor at Penn State called Christopher Reed, published a document on his university website called ‘Axiomatic,’ which critiqued the censoriousness and totalitarian

It also contains the line “Once upon a time, there was a word for people who worked together to dismantle conventional gender roles. That word was ‘feminist.'”

So obvs, I think this dude is a good egg.

‘Axiomatic’ is no longer available on Reed’s website, because of the events that unfolded, I’m sure you can imagine what’s going to happen…

First, Grace writes this in the LA Review of Books in Oct 2018.

I can’t be bothered to say much about this, it’s just an academic iteration of the bog standard bullshit we deal with here everyday.

“We cannot force Chris Reed to respect us. But we can see, better than he can, the ugly complicity between fascism and the liberal arts

that he has taken up the mantle of defending.”

Anyone who disagrees with me is a Nazi.

I will force you to comply by calling you a bigot.

No, it not the people coercing perception who are the fascists. It’s the people who want to be free to name their own perceptions.

Incidentally, this whole event was what inspired my thought of ontological totalitarianism…

Especially Reed’s claim that “The only ethical conclusion to the statement that begins “My pronouns are” may be “I and me.””

Reed responds to Lavery in December 2018, along with his colleague Christopher Castiglia.

They argue, highly controversially of course, that you probably shouldn’t go around dictating other people’s perceptions to them.

Because that’s not how adults who have matured enough to recognise that other people exist behave. 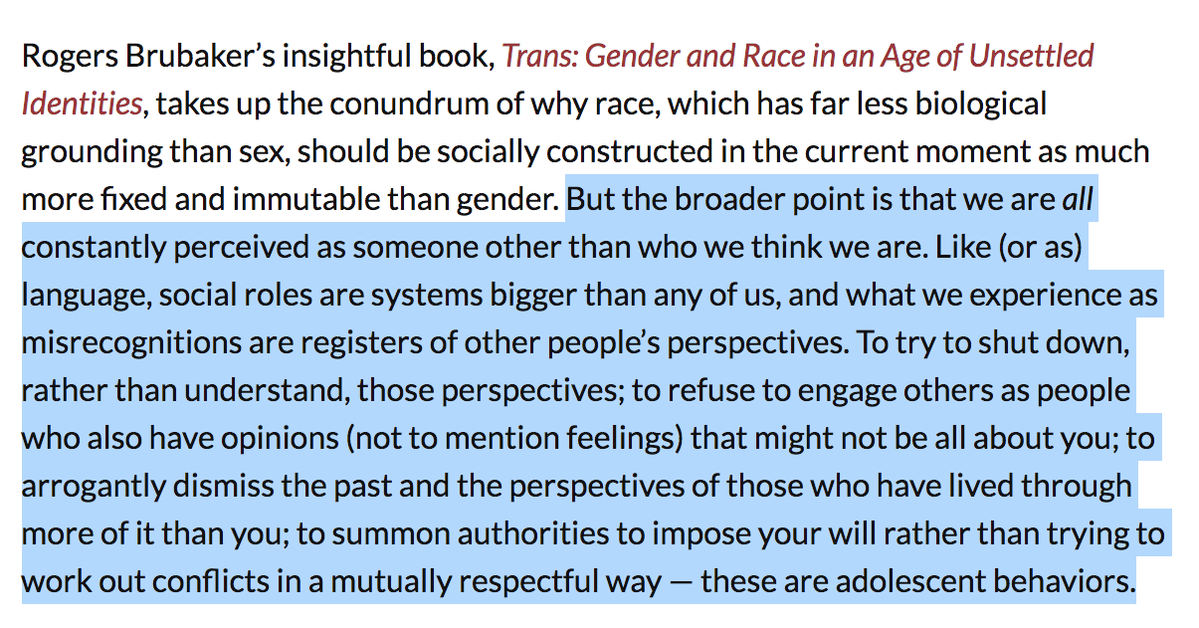 Two days later a bunch of QT academics pile in to back up Lavery. They produce no argument – SURPRISE! They just assert Lavery’s conclusion that people are not free to name their own perceptions and doing so is an act of aggression equal to harassment.

This is the point where it becomes evident that academic QT has completely betrayed the thought of anti-normativity.

It’s one of the great iterations of what we can think of as ‘queer disciplinarily.’

‘YOU WILL FOLLOW OUR NORMS OR WE WILL USE THE LAW TO DISCIPLINE YOU MFKRS.’

Finally, on 19 December, the inevitable recanting and dead-eyed recitation of atonement is extracted.

Reed has done the listening and learning. He has been successfully re-educated.

Addendum: So having said I can’t be bothered with Grace’s letter, I do want to point to one thing…

And that is the core claim that people drawing boundaries is inherently fascistic.

This is the where the analogy between women who say no, and fascism gets its traction in the left-wing mind.

I discussed this in a presentation I gave in Reading Uni in 2019.

The point I want to make is this.

There is truth in the claim that people in power often construct other people as a threat in order to dominate them, and to mobilise a popular form of sovereigntist purity fantasy… this is the core of Brexit, and the Great Wall of Trump.

It is not, however, true, that all forms of boundary drawing are fascistic.

For that to be true it would have to be true that nobody every tries to dominate, appropriate, colonise or violate anybody else. And that every claim that someone is doing that is just a power move to

try and demonise and dominate another person or group.

This is PRECISELY the logic trans activism uses against women.

All of women’s concerns about being appropriated or violated are just hysterical fantasies (as Butler claims in the last NS piece), we are ‘weaponising our

trauma,’ we are constructing others as a threat when they just want to pee, etc etc…

All of this, in fact, is a fundamental denial that we live in a rape culture, that women are socialised into a service class that is not granted to right to have its own boundaries, and that

women who assert boundaries are consistently, and with great ease (as this whole clusterfuck has shown), demonised as mean, unkind, evil, wizened, hate-spewing etc etc etc…

This is an exact manifestation of the appropriating logic of patriarchy.

And ANYBODY who is able to believe that all forms of boundary drawing are just an artefact of power trying to preserve and purify itself, and demonise others for its own sovereigntist ends, is someone who has NO IDEA or AWARENESS of what it is like to be socialised into the

rapeable class, or to be subject to consistent, dominating, boundary violating power…

Which is to say, the belief that boundary drawing is always and only fascism, is, in itself, an artefact of being in a position of dominance.

There are a cluster of pieces in Issue 1 of @radical_notion exploring these ideas around boundary drawing, how central it is to feminism, and how alleged progressivism has massively fucked up its thinking on this one…