Self-id is a misnomer. Anyone can “self-identify” however they please—as a precious child of God, Python fan, diva, heir of the Enlightenment, a man or a woman or neither, whatever that means to you.

Of course, certain identities may—in quiet moments of self-reflection—sit a bit uneasily if inadequately supported by reality. A self-identified “artist” who never creates, for instance, might feel self-conscious at loft parties. This isn’t really anyone else’s problem, though.

But the particular fragility of gender identities and their bearers requires the construction and maintenance of a psychic exoskeleton, the upkeep of which requires the outside world to participate.

So, self-id isn’t really about having the freedom to believe whatever you wish about yourself but about leveraging social, economic, and ultimately legal pressure to coerce other people into believing or pretending to believe in your idea about yourself. 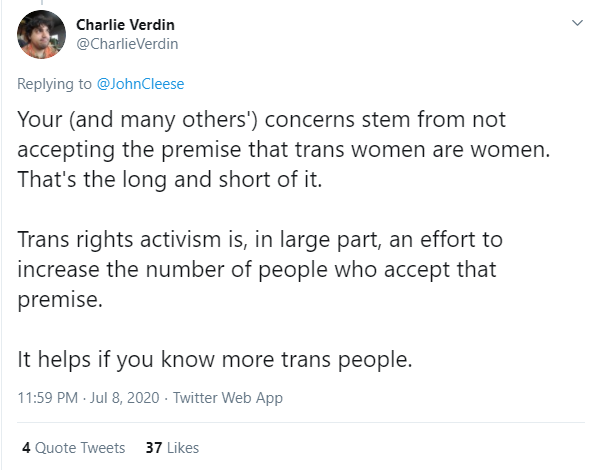 Refusal to play along—even in the privacy of your own mind—is described as “harm,” hatred, and even denying people’s existence. 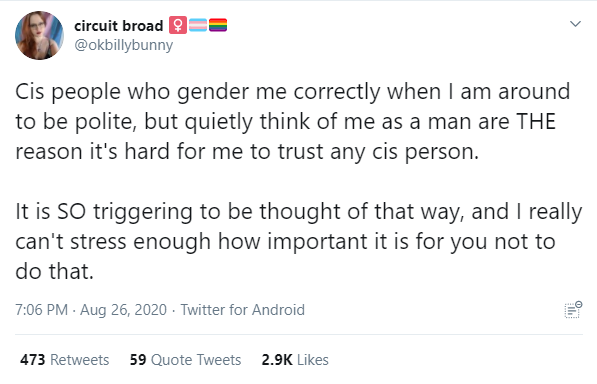 The only sense in which gender identity can be “true” or become “true” is for other people to buy in, expressing their belief in one’s gender identity and thereby validating it. If others pretend convincingly, they don’t disrupt the fantasy or escape gender identity provides.

But since people can’t be relied upon to ignore what they see, “recognition” must be coerced if it is to be guaranteed—by dictating pronouns and raising the cost of “slipping up” and “misgendering” someone so that everyone else walks on eggshells.

This is all a bit like insisting a feather doesn’t respond to gravity by coercing everyone to stand underneath it and blow on it—even to the point of trying to legislate a sustaining breeze.

Quite aside from the petty authoritarianism self-id imposes on other people, what’s actually freeing gets lost in the scramble: being yourself,not caring too much what other people think, not depending on external validation to prop up your sense of self.

A movement that inculcates such fragility and neediness doesn’t have its adherents’ best interests at heart. Rather, it laces social life with landmines, and strains and estranges relationships so that one’s support network contracts to fellow believers.

A loved one who fails to follow the elaborate recognition protocols you’ve been led to expect gets the boot. The author of your favorite children’s books raises compassionate concerns and you’re encouraged to shun every word she’s ever written—for your own good, of course.

In that kind of setting, asking questions, raising concerns, changing your mind, and walking away become extremely costly to even consider. Even thinking for yourself, in the privacy of your own mind, threatens to upend your shrinking world.

The kind of demands the trans movement makes seem designed to fail, designed to further isolate believers from loved ones, alternative sources of information, even the ability to communicate beyond the group.

There’s a reason this looks so much like a cult to those of us on the outside, and to many who have left.

Cults want you to doubt yourself, so that you will outsource your judgment to others. Cults mobilize your shame and vulnerabilities.

Cults isolate. Cults “interpose a fact-proof screen between the faithful and the realities of the world,” and place knowledge—the kind of knowledge that comes from your own experience, the kind you can build upon, the kind you can act on—out of reach.

Handing over your judgment, your very sense of self to others is never the way out of a problem or the way through a hard time. It’s a way to find yourself manipulated, perhaps by people who mean well but don’t trust you to figure things out for yourself, but perhaps not.

Someone who truly cares for your wellbeing will not lie or pretend for you. They will not try to control what you read or who you associate w/. They will encourage you, always, to think & judge for yourself. Any movement that says otherwise doesn’t deserve your allegiance.

And a movement like that won’t be there for you when YOU are the one who thinks differently, when you have questions, when it’s your experience that deviates from doctrine.