So there’s a lot of the “cis/trans is just like gay/straight, it’s just a label, why are you such a bigot?” bs doing the rounds at the moment. No, it is not. Here are some pictures to explain why not, with examples.

First of all let’s introduce a cast of characters. This is so we can see how the difference affects people in real life scenarios. Let’s also assume that they all work for a tech company, of which Tony, a beardybro, is the MD. 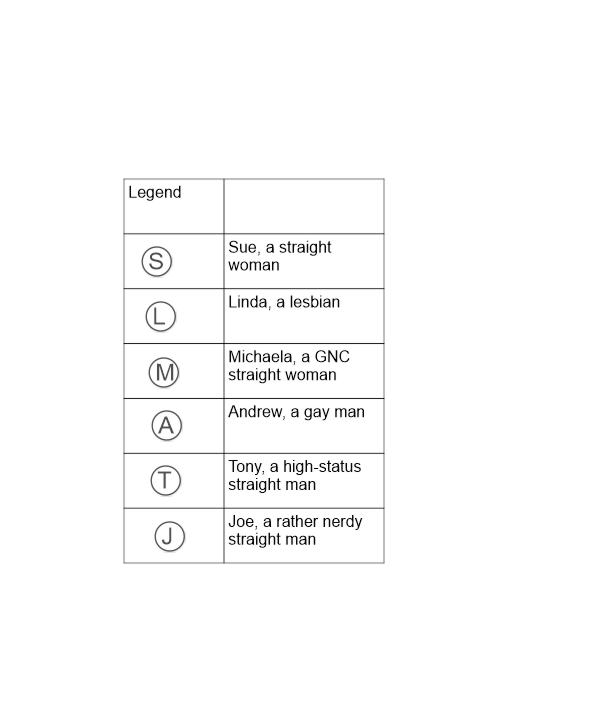 I’ll be using man and woman in their dictionary sense here – adult human male and female respectively – to clarify the argument. Likewise pronouns.

When we begin, the men are Tony, Joe and Andrew. The women are Sue, Michaela and Linda.

So if we take neither sexual orientation nor gender identity into account, this is what the picture looks like. Sex class is a hierarchy. Women are disadvantaged. Lesbians and GNC women are particularly disadvantaged. Thanks to feminism women have made some gains. 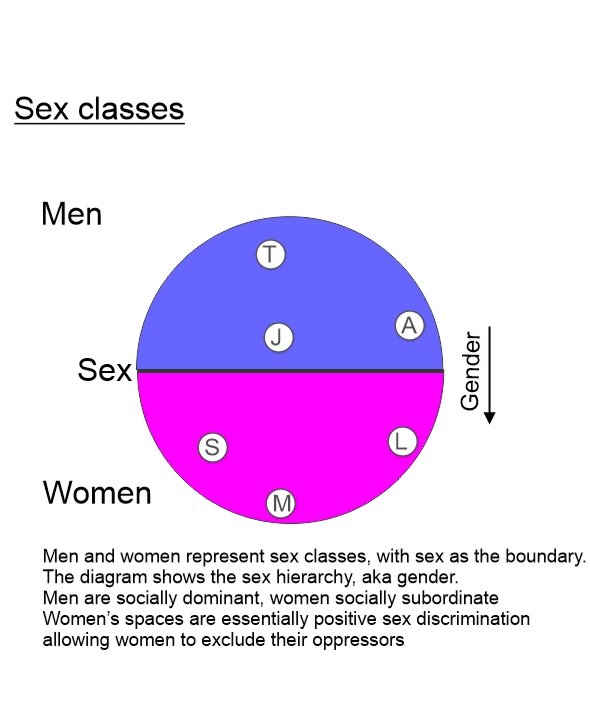 Sue and Linda have successfully campaigned for single-sex toilets and a Women’s Performance Award. Sue does exactly the same job as Joe, but discovers that Tony is paying Joe more. She goes to HR, who tell Tony that it’s an open-and-shut sex discrimination case. He sorts it.

Sue is married and expecting a baby. She asks the company to make provision for her to breastfeed or express milk at work once she comes back from maternity leave.

Adding sexual orientation to this picture (and protecting it) doesn’t change anyone’s status relative to anyone else. It improves things for Linda and Andrew. Andrew was concerned that Tony might be a bit homophobic. He feels much safer at work now. 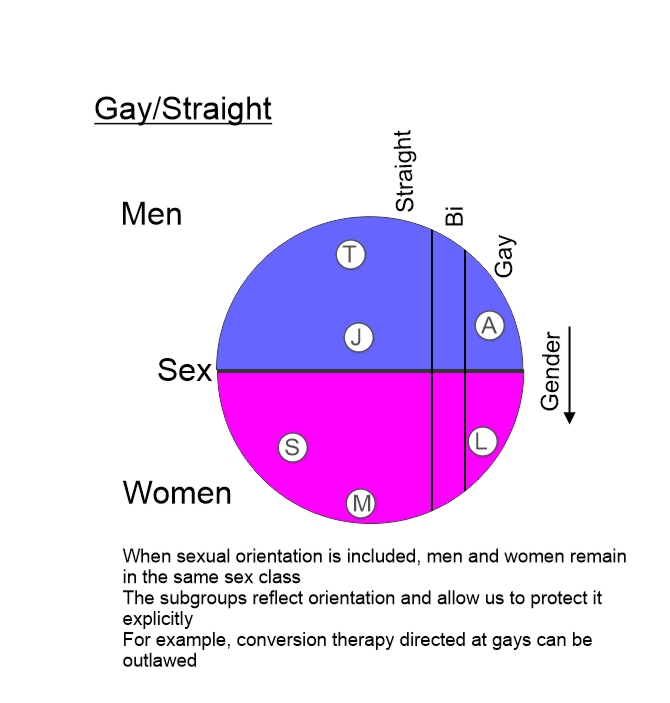 Joe harassed Linda a bit at one point, telling her ‘jokingly’ she ‘just hadn’t found the right dick yet’. Now she’s able to go to HR and get him compelled to stop.

Now we introduce cis/trans, with legal force as above. Joe identifies as a woman – Jo – and dresses as one, although he doesn’t make any physical changes. Michaela identifies as a man – Michael – and starts taking T. 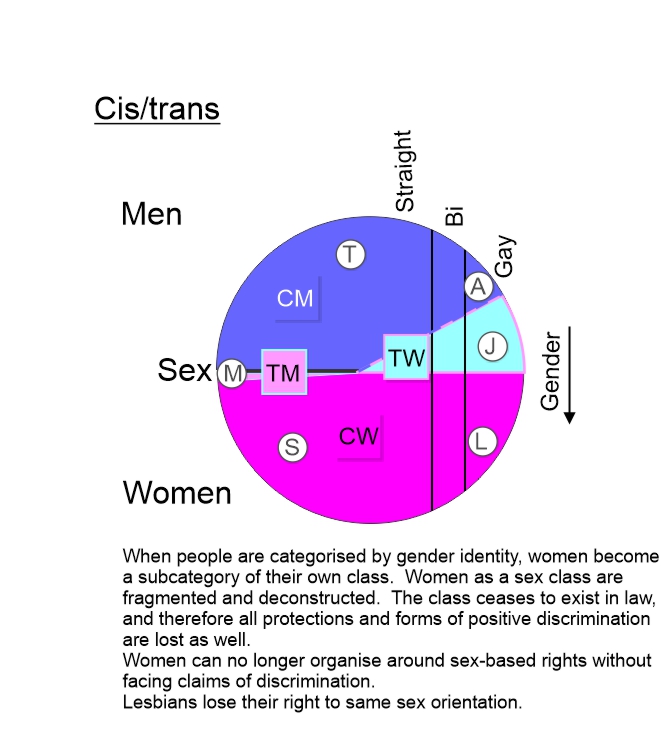 The men are now Tony, Andrew and Michael. The women are Sue, Linda and Jo. So for starters, the membership of each protected group has changed, and they have all become mixed sex whether the members like it or not. Jo has also apparently changed sexual orientation.

Jo is legally a woman, and any man can do what Jo has done via self-id (the dotted pink line between transwomen and cis men). So men effectively have full access to all categories and spaces. Meanwhile the boys’ club excludes Michael effortlessly.

Michael struggles. She’s transitioning physically and doesn’t think she should be in the women’s loo, but feels unsafe in the men’s. One night she works late with Andrew and tells him she’s always fancied him. He rejects her brutally. “Gay men like cock”, he says.

It harms their working relationship, and Tony blames her. He also gives Jo another rise. When Sue finds out, she’s furious and marches into his office to challenge him. “It’s not discrimination,” he says. “You’re both women. I’m rewarding her performance.”

“And don’t waste my time about breastfeeding,” he goes on. “Men can breastfeed too, so I’m not providing the facility, and I’m not discriminating.”

Sue has lost legal rights to sue for sex-based discrimination.

Tony uses Jo and Michael to balance the gender pay gap books. He underpays Michael, whose female socialisation prevents her from protesting, and keeps boosting Jo’s pay. Everybody applauds his commitment to gender equality. He’s still a sexist though.

Linda has meanwhile formed a Lesbian Women’s Group in the company. Jo demands to be included. She says that wouldn’t be appropriate because he’s male. He says he identifies as a woman and a lesbian.

She still refuses. He goes to HR and accuses her of transphobic discrimination. HR backs him up. She reminds them of his former sexual harassment of her. They say there’s nothing they can do.

The lesbian group is forced to include him. He dominates the conversation and keeps showing them articles about teaching lesbians to do dick. The group folds. As much as the women miss it, Jo makes them too uncomfortable.

Lesbians have lost the right to associate separately and to exclude men who demand sex from them. Their right to same-sex orientation has been badly compromised if not completely lost. Linda cannot use homophobic hate crime to deter Jo because Jo is now a lesbian in law.

Andrew nominates Jo for the company Women’s Award, which Jo wins. He also wins the company running club Female Runner of the Year award, which Linda used to dominate. When he ran against the men, Jo was lucky to come last. Linda, meanwhile, ran for her county.

Sue, Linda and Michael have a long talk about this one night and decide to go to HR. They are well aware that they are being hugely discriminated against on the grounds of sex, even though Michael identifies as a man. They schedule a meeting.

The HR manager tells them she’s privately sympathetic, but that there’s nothing she can do, and that she can’t really speak to them as a group because they’re not representative of either men or women. (She’s also been warned about what will happen to her if she supports them.)

They try to discuss it with Jo, and also the fact that he’s messy in the loo and makes them very uncomfortable. He goes to HR and accuses them of jealousy and transphobia. It’s upheld again.

Tony tells Sue that she either resigns after giving birth or he will fire her for discrimination.

Sue, Linda and Michael realise that their rights as a sex class, including the right to organise collectively, have been removed.

What is happening is that sex, the oldest and most intractable axis of oppression, is being ignored by policy makers. (It’s also the axis that society goes to the most trouble to conceal, because addressing it would require truly fundamental changes.)

So shifting the category boundaries like this without considering sex actually introduces a sex hierarchy into the category ‘woman’. 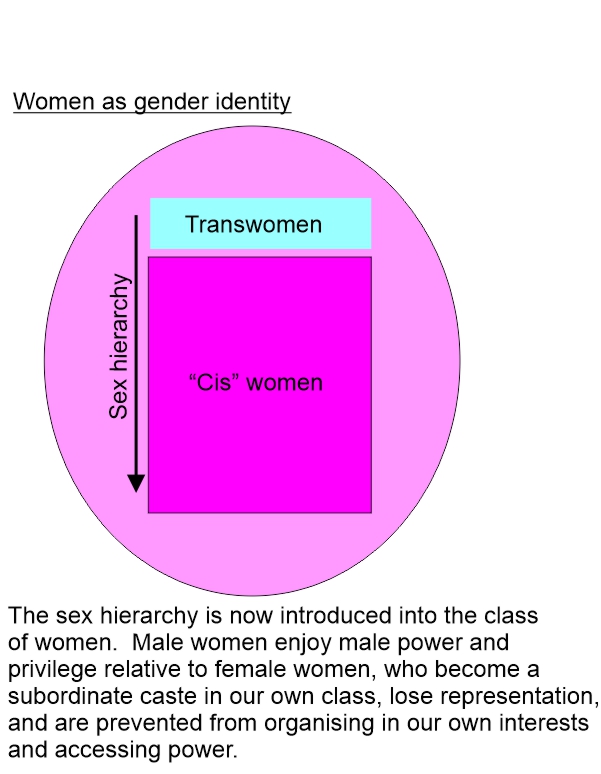 Women become a subordinate subgroup of our own category. Male women are treated as representative, and are permitted to define women, but women cannot define or represent ourselves. We can’t even have a meeting without men.

Not only are we pushed off all the gains we have made in the last hundred years, but our ability to organise to regain them is removed. Patriarchy triumphs again.

Except it doesn’t, because women are much, much cleverer than the patriarchy gives us credit for.

Except it doesn’t, because women are much, much cleverer than the patriarchy gives us credit for.

Cis is damaging, sexist bullshit which conceals and obfuscates the complete removal of women’s rights by conflating oppressors with oppressed.

Cis is damaging, sexist bullshit which conceals and obfuscates the complete removal of women’s rights by conflating oppressors with oppressed.