Changing the definition and membership of the class of women to include men affects ALL women and ALL our rights. Handwaving this with “trans women are women” doesn’t cut it. Not until you’ve redefined us, they’re not.

No, we will not pretend not to notice this gaping flaw.

While various social trends have contributed to this clusterfuck, a timeline will help us understand some of what is going on here.

t1 is probably round about the end of the 2nd wave. We all knew what a woman was and women had finally acquired some reasonable rights.

All those rights, we should mention, were clawed out of patriarchal space inch by bleeding inch, and we got them only because of the extraordinary tenacity and courage of the women who fought for them. Women like the suffragettes, the 2nd wavers and of course the infamous terfs.

“If men approve of your feminism, you’re doing it wrong.” The 2nd wave dictum is as true today as it was then. Real feminism produces a vicious response from men across the political spectrum. Anything they’re coming in their pants with excitement over isn’t close to feminism.

So then at t2 various ‘feminist’ philosophers started jumping through extraordinary hoops to deconstruct the concept of woman as female. The circularity, question-begging and reification of stereotypes required for this is mind-boggling. It’s also patriarchal.

However, it got traction in a feminist academe completely colonised by postmodern notions of power as some sort of diffused background noise resulting in problematic relations between individuals (kyriarchy, anyone?), and the startling queer theory assertion that categories, and

not the power relations between them, are the basis of oppression. All of this, as Somer Brodribb pointed out, is part of the backlash against feminism. Neoliberal patriarchal capitalism co-opts and distorts rather than openly attacks, unless you’re in the 3rd world, of course.

The notion that there is only a map and no territory also plays into this (no wonder they’re lost). Language certainly does construct concepts, and concepts should be interrogated, but they can also be descriptive of reality, which doesn’t yield to men in black polonecks.

And it hides structural power beneath all this waffle, because it’s a bit hard to speak truth to power if you can’t find it.

However, all of this has an elite academic pedigree, so t3 was the point at which it was possible to assert that trans women were women, and #nodebate!!

Which of course brings us to t4 and Biden’s “transgender equality is the civil rights issue of our time” guff and all the hoohah which conveniently positions the gruelling gains of the 2nd wave as, wait for it, patriarchal oppression of the most marginalised women. Riiiiight…

This is the view which trans activists and the men and handmaidens supporting them want us to have; here is this terrible injustice in our midst and these hideous, bigoted women are keeping OTHER, marginalised women out because they are transphobic haters.

And the liberal chattering classes climb on board without thinking, because who on EARTH would be cruel enough to exclude a handful of desperately unhappy transsexuals?

Sorry, mate. We’ve got a LOT of unfinished business at t2. The stuff you’d like to brush under the rug.

Now I’m not an expert on this (and I do hope a couple of the philosophy giants in our midst will do this properly, nudge nudge @janeclarejones @Docstockk ), but there are a couple of papers which seem to exemplify the sexism-disguised-as-feminism approach in this genre.

Sally Haslanger’s Gender and Race: (What) Are They?
(What) Do We Want Them To Be? is one of them, although to be fair to Haslanger her project is targeted at fighting oppression. Her notion was that an ameliorative inquiry would provide concepts that worked to increase justice.

They were what the concepts OUGHT to be if we were serious about fighting injustice.

This is how her re-definition of ‘woman’ came out:

There are a couple of disturbing things about this. The most obvious is that women are *defined* in terms of our oppression. She does admit that this excludes women who are not oppressed, but her argument is that they don’t need feminism anyway.

But the implication is that if the oppression of women ceases, then women cease to exist (as do passing tw of course). We become, presumably, some neuter subject identical to males in every possible way. This replicates every patriarchal notion of the female as inferior.

Another problem is that gender, like race, is treated as completely socially constructed, but the different material conditions underlying sexism and racism are ignored. Given the hideous levels of racism in the world at the moment, it’s unlikely that a society in which…

..skin colour was not salient could exist. But it’s not impossible. There is no fundamental mechanism in human society which relies on skin colour to function. It could become something which, quite simply nobody notices, any more than they notice your eye colour.
..ctd

As long as we remain sexually dimorphic mammals (and don’t fall into the clutches of the transhumanist death cult, the latest patriarchal religion), this is simply not true for sex. Men and women will always play different roles in reproduction.

So there is no possible society in which sex is NOT salient, and a liberatory society is one in which women – females – are not oppressed because of their reproductive capability. This means positive support and respect for women’s reproductive role and choices.

This makes a positive, sex-based definition of ‘woman’ crucial to women’s liberation, and attempts to destroy the category are thus deeply sexist. We are not amateur males. (Here comes Difference Feminism!!)

And the last problem with the definition, of course, is that in the best postmodern intersectional style (which is the point, of course), it doesn’t mention men, our oppressors, at all. Being subjugated is women’s identity; the people who subjugate them are invisible.

The subjugation of women isn’t women’s problem. It’s men’s problem. They’re the perps. Male supremacy is what we’re fighting, not some amorphous background ‘power’ goo like the zero-point field or something.

And while we’re on the subject, men colonising feminism and lecturing women about it is male supremacy. Male feminists are not our alllies, they’re our tinpot dictators. This is what a male ally looks like:

You have one job: confront men.

But for all this, Haslanger is at least trying to improve the condition of women. Not so much the next one.
(ctd..)

Katharine Jenkins’ Amelioration and Inclusion: Gender
Identity and the Concept of Woman* argues that Haslanger isn’t inclusive enough (bcos non-passing transwomen.) It’s jaw-dropping in its narcissism and blatant male supremacy and is worth a read for that alone.

I could spend hours dissecting it, but I think a few choice quotes will get the gist across. Jenkins’ concern with Haslanger’s redefinition, is of course, that it might exclude a few transwomen, even if they’re not oppressed. What else could there be to worry about?

All the TWAW, “trans women are the most oppressed” and “trans identities must be respected no matter what” stuff comes up right at the beginning, as axiomatic, with no debate. We haven’t got to an attempt to define women yet, though. 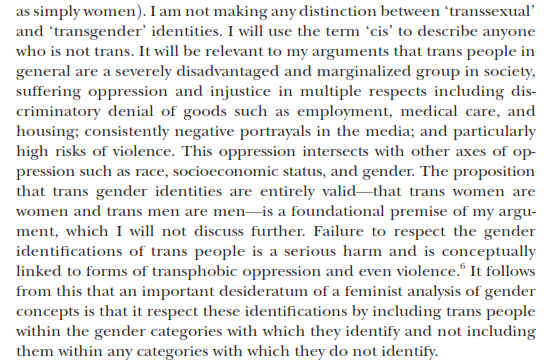 This used to be called “begging the question”. So it appears that we now have not only ameliorative definitions, but ameliorative logic as well. “The conclusion will say what I want it to, regardless of the construction of my propositions.”

Jenkins comes up with some sort of dual concept of gender as class and as identity (the former to pacify those pesky feminists who think rape, menstrual stigma and other irrelevant shit is still important, I suppose), the latter to make sure that no trans identity, of any sort,..

is ever, under any circumstances, excluded. Jenkins goes on to assert that while Haslanger’s exclusion of women who aren’t oppressed is cool, the exclusion of ANY transwoman isn’t.

We then get to the tricky question of what a transwoman is. Basically, anything a transwoman says it is, no questions tolerated. The definition of woman can be twisted, mangled, cut up, glued, bastardised, contorted into anything at all, as long as it includes transwomen. 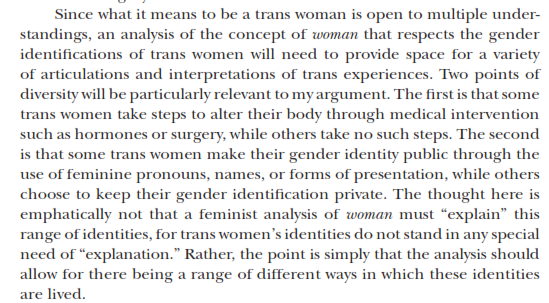 And if you want to make gender about oppression, the real oppression is that it doesn’t include all transwomen.

And here’s the meat. No matter what men do to women, no matter how badly women are beaten, raped, forcibly impregnated, mutilated, murdered, excluded, none – NONE – of this must be allowed to take priority over including all transwomen’s gender identities. 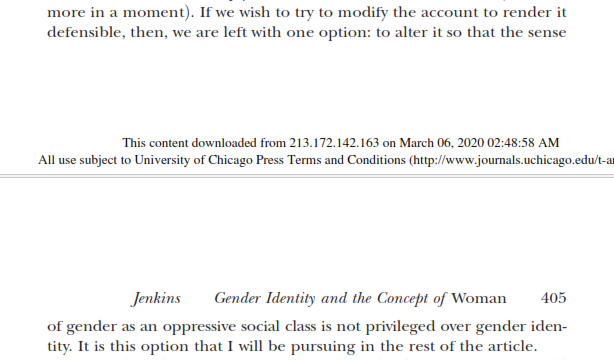 Seriously. How gaslit do the handmaidens of academe have to be to give this entitled, sociopathic drivel the time of day? There is exactly one appropriate response to this:

Finally, we get to what REALLY makes a REAL, womanly woman. Guess what the “social or material realities that are, in that context, characteristic of women as a class” means. A gender stereotype. You are a woman iff you identify with a gender stereotype.

So on Haslanger, oppression has to exist for women to exist, although at least she’s agin it. On Jenkins, oppression isn’t important as long as we acknowledge that anyone who identifies with a gender stereotype is a woman.

And what does this mean for women? It means we have to stay oppressed for our class to exist, and we have to adhere to gender stereotypes so transwomen can be women by identifying with them, and this is more important than fighting our oppression.

THIS IS THE APOTHEOSIS OF FUCKING PATRIARCHY!!!!! ALL HAIL KING DICK!!!!! From Adam’s rib to Madam’s rib.

And the answer to this demand for “inclusion” is thus a great big fat loud “NO!!!!!”. Not a damn. We will change our word to something else and fight for our rights all over again before we’ll get into THIS womanbox.

It’s unnecessary to even consider this for the sake of including dysphoric transsexuals. All we have to do is say what they are and then care for them:

It’s unnecessary to even consider this for the sake of including dysphoric transsexuals. All we have to do is say what they are and then care for them: https://t.co/v0BPIikOOR

This is the patriarchy’s fifth column and it has nothing to do with trans rights.

This is the patriarchy’s fifth column and it has nothing to do with trans rights.

And a final note: we need to get back to radical feminist principles. Do you know why they’re so scared of radfems, why they demonise us, why they will first tolerate and then colonise some variants of liberal feminism, which seeks to improve women’s position in the malestream?

Because radical feminism first names male supremacism as the problem, and then points out how it is implicit in *all* the structures of our society. To liberate women, we have to start from scratch. It is the most subversive and revolutionary ideology in existence.

There is no negotiating with this. We must tear it down.

Oh, and a last observation : feminists are as capable of being racist as the next person, and feminism needs to address this wherever it crops up. But that’s not why there’s so much jeering at ‘white feminism’ and positioning us as entitled middle class oppressors.

It’s because we’re oppressed on only one axis. Being less constrained by the structural issues of race and class than so many other women, we can focus all our activist energy on going straight for the patriarchy’s balls. We scare the shit out of them.