1/ Is sex really a Spectrum?

There are a couple of articles which have been widely quoted as “proving” that sex is not binary, but rather a spectrum. The main article is this one:

2/
The other article quoted, which is actually a blog post based on the first is this one:

3/ So let us look at the first article in detail. The first thing to note is that this is not a research article, it is an op-ed. The introduction tells us of the strange case of a a woman who’s “body was built of cells from two individuals, probably from twin embryos that had

4/ merged in her own mother’s womb. And there was more. One set of cells carried two X chromosomes, the complement that typically makes a person female; the other had an X and a Y.” This incredibly rare condition is used to introduce us to Disorders of Sexual Determination (DSD)

5/ Or as the author states, “differences” of Sexual Determination. I’m pretty sure that this is not used clinically – but is important in the context of sex being a spectrum. We are told that ” Parents of children with these kinds of conditions …. often face difficult decisions

6/ about whether to bring up their child as a boy or a girl. Some researchers now say that as many as 1 person in 100 has some form of DSD.” the 1 in 100 figure as been widely used to “prove” that sex is a spectrum, it originates in this paper: https://t.co/4Fz9VBdcDB 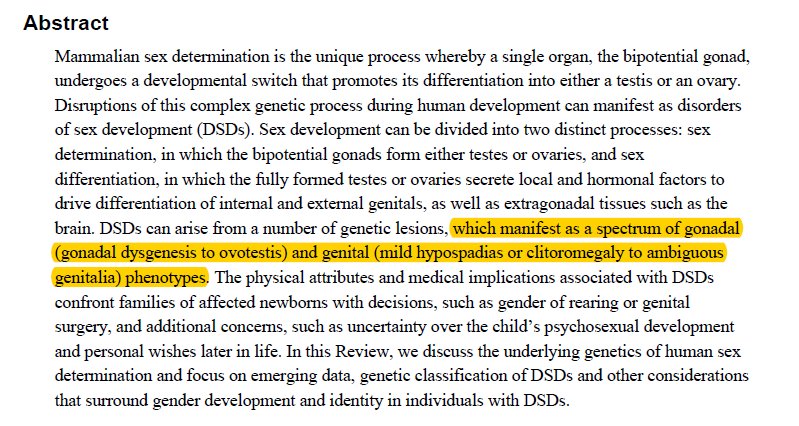 7/ Careful reading of the paper shows that the 1 in 100 figure comes from a new way of classifying DSDs in a way that includes all anomalies of the reproductive organs, many of which are “mild” and would not put in doubt the sexuality of the individual e.g. Hypospadia – this is ” 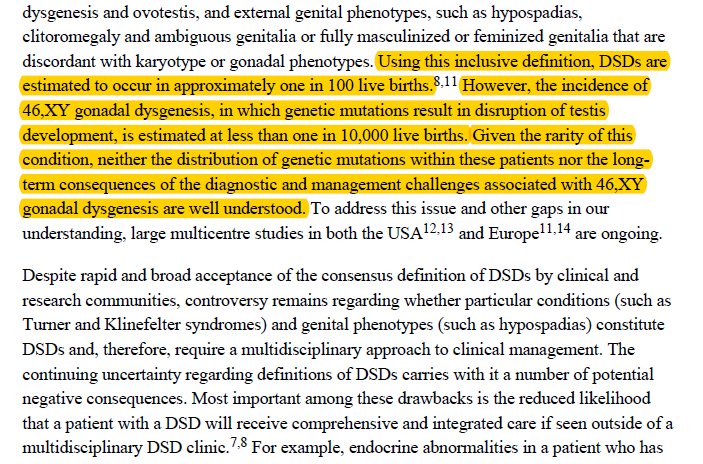 8/ a condition where the meatus isn’t at the tip of the penis. Instead, the hole may be any place along the underside of the penis. The meatus (hole) is most often found near the end of the penis (“distal” position). But it may also be found from the middle of the penile shaft to

9/ the base of the penis, or even within the scrotum (“proximal” positions).” Whilst undoubtedly a difficult condition to have to deal with – it obviously is not any kind of indicator of a “sex spectrum”

10/ “However, the incidence of 46,XY gonadal dysgenesis, in which genetic mutations result in disruption of testis development, is estimated at less than one in 10,000 live births.” If the obviously unambiguous disorders are removed, the incidence of DSDs is seen to be much lower

11/ The paper describes the genes which are know to be involved in sexual determination and how MUTATIONS of these genes cause DSDs. Sex determination is incredibly complicated and involves a network of interacting genes. This does not mean that sexuality is “pick & mix” 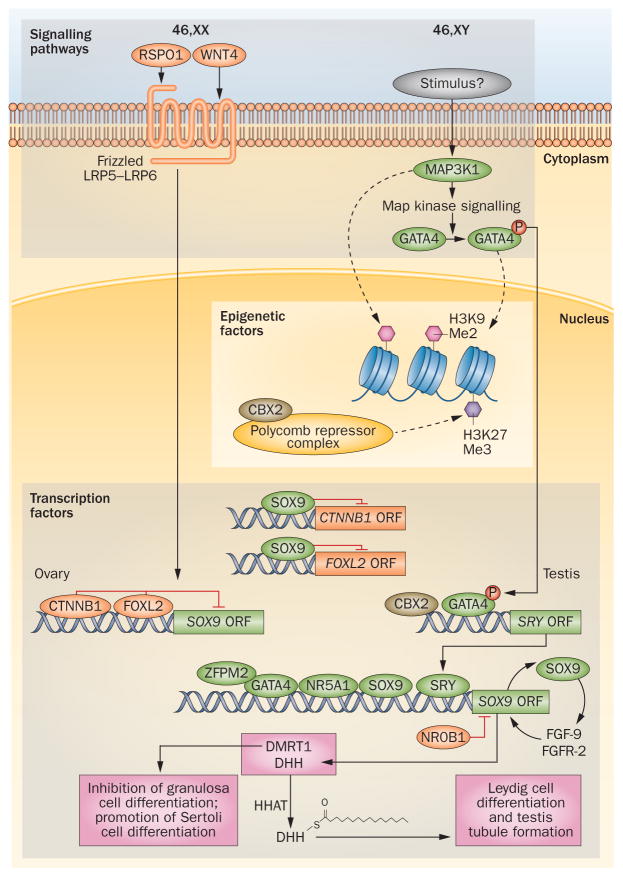 12/ depending on which particular group of genes are expressed or not in an individual. The paper describes disorders caused by mutations, the words “mutate or mutation” occur >100 times. The word “spectrum” occurs 2x. 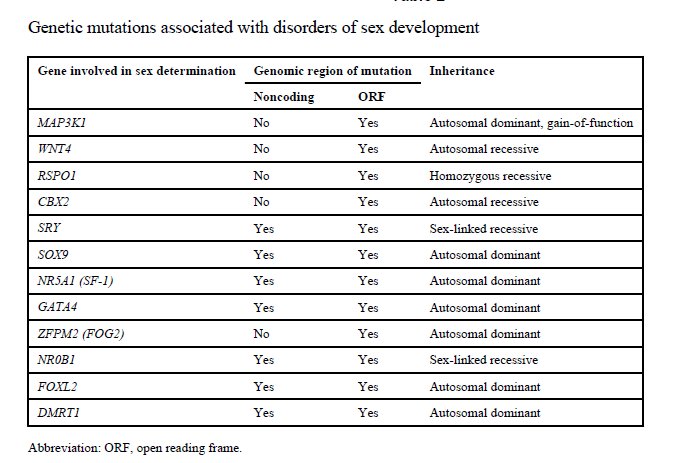 13/ Both times that spectrum is used, it is in the context of disorders. There is no statement in the paper that the data examined leads to the conclusion that sex as a spectrum.
So let us turn back to the Nature Op-ed piece.

14/ The writer give 2 quotes from Eric Vilain (the senior author of the paper):
“It has been, in a sense, a philosophical change in our way of looking at sex; that it’s a balance,” says Eric Vilain, a clinician and the director of the Center for Gender-Based Biology at the

15/ University of California, Los Angeles. “It’s more of a systems-biology view of the world of sex.”
“Biologically, it’s a spectrum,” says Vilain.
Neither statement appears in the paper. A google search for “Vilain Spectrum” yielded:

16/ The only time “Spectrum” occurs in this article is in the headline. Again, there is no indication that Vilain believes that sex is a spectrum. He is takes a cautious view to surgery on babies with ambiguous genitalia and is described as an Intersex Ally.

17/ Whilst “Vilain’s research and interest in policy has put him on the front lines of the lesbian, gay, bisexual, transgender and queer (LGBTQ) rights movement and has made his lab a magnet for LGBTQ students”, his work remains focused around DSDs not gender dysphoria.

18/ There is no indication in the research paper discussed above, or in any other research that I have looked at, that there is any association of DSDs with Gender Dysphoria. Use of this and other work to support the idea that sex is naturally a spectrum and that our

19/ “inner feelings of sexual identity” are in due to differential expression of the many genes involved in sex determination is simply bad science.
So in answer to those who say it’s not just the X or the Y that matter, this is true, BUT the presence or absence of the

20/ SRY ultimately determines the developmental pathway taken by the Bipotential gonad in the early embryo. This is stated in the paper form Vilain’s lab several times.
END 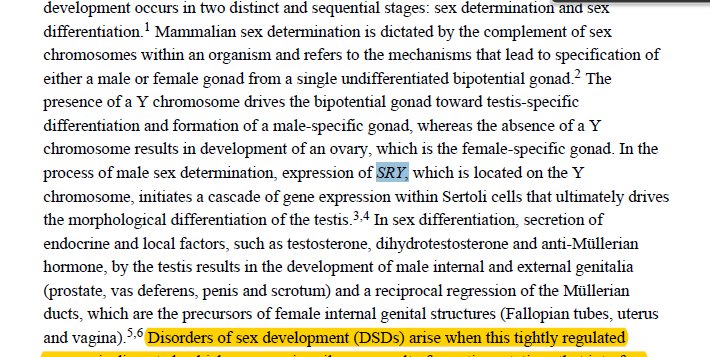 Just adding this disclaimer from Claire Ainsworth.
There are 2 sexes.

Just adding this disclaimer from Claire Ainsworth.
There are 2 sexes.
https://t.co/qVp7AkPkMd