This constant talk of women ‘playing the victim’ and ‘weaponising trauma’ is beginning to create a hard, dense shard of rage that I’m worried might get stuck in my heart forever.

People have noted, but it’s becoming ever more evident, how there is this visceral, primordial, animus in misogyny, and the ways it is structurally similar to anti-semitism…

We are this dark, evil, shadowy force. We have illegitimate and terrifying power over people and over

society. We wield this power through deception and manipulation, by pretending we are weak and victimised, although our only intent is dominating and destroying other people for our own evil ends. Nothing we say is legitimate, or to be trusted.

We are everywhere, inside the body politic and its institutions, and will corrupt their truth and goodness.

And so we must be ferreted out, identified, shamed, and cast out…

So let’s break this shit down.

1. As we know, the variability and reliability of the suicide stats is an issue. Even if this statistic is true, as many have noted ‘shut up and do what I say or I’ll hurt myself’ is abuser logic. 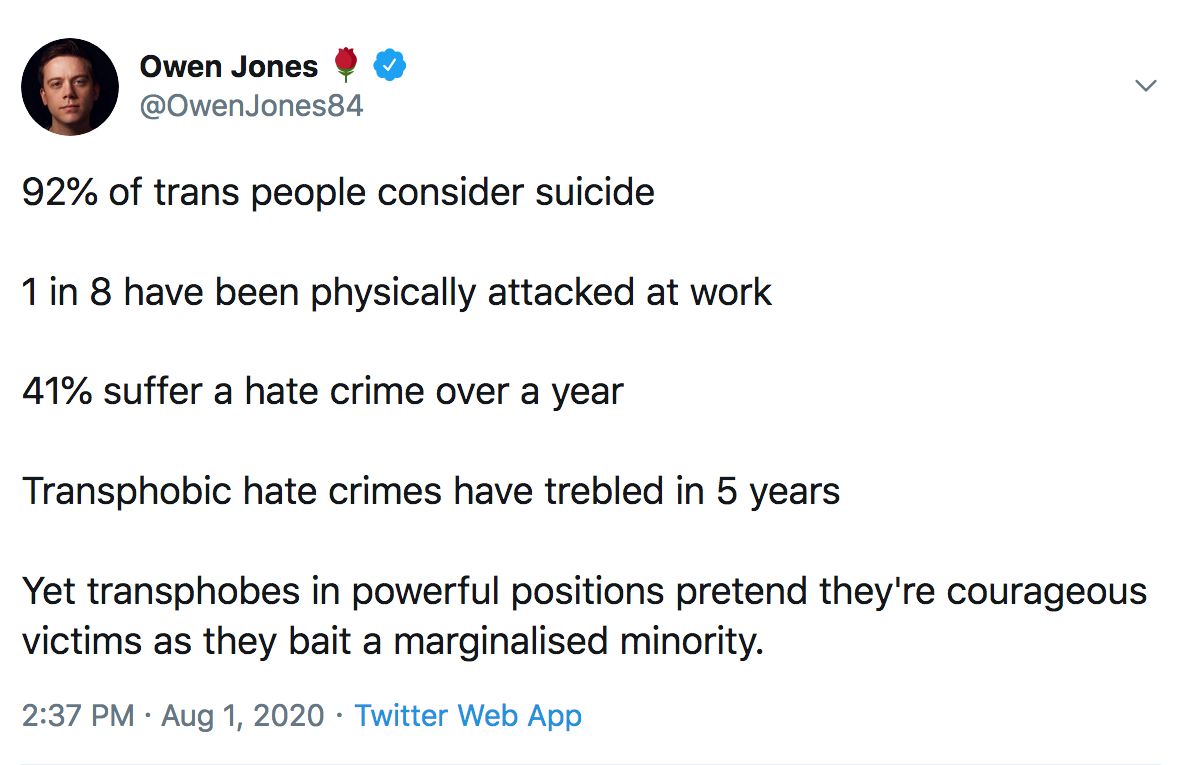 is itself a product of a certain economy of entitlement and power. If you really are as powerless as you claim, then this kind of threat doesn’t carry the incredible political weight it is currently carrying.

Women are carrying a MASSIVE burden of trauma-related disorders.

Nobody gives a fuck. In fact, you use it to call us manipulative bitches. Why is the pain of trans people enough to justify the demand we entirely re-organise reality and the pain of women just a nasty deceptive weapon???

The answer is sex-based power stupid.

3. Using suicidal ideation for political leverage, and propagating that discourse to young people, is so fucking immoral it makes my brain explode.

4. Hate crimes. What counts as a hate crime? Because in your world view, ‘believing sex exists and is politically relevant’ does.

5. You know misogyny isn’t a hatecrime right? Do you know why that is??? Because if it was the police would be FUCKING SWAMPED and never get anything else done. Owen, every single female person alive is a victim of misogynist woman-hating violence. Usually by the time they are in

6. But female people are not victims of anything.

They could never be

trying to express their own needs or political interests. Those needs do not exist or are not legitimate. Everything women do or say about themselves is only ever a weapon against other legitimate victims.

Note, trans people are a ‘minority’ in this calculus. Women are not.

The entire structure of trans ideology is fundamentally predicated on denying that female ppl are oppressed qua female. Women are only ever ‘rich’ ‘cis’ ‘white’ ‘powerful’ ‘het’. We are never allowed to appear in discourse as female people speaking about being female.

7. Most of the media is on our side. Because the media is totally under the control of people whose principal concern is the endemic sexual violence against women and children.

evil witches, and that the publication Owen works for (and is effectively holding hostage) hasn’t published anything that represented our views since @suzanne_moore’s column caused a massive meltdown is neither here nor there. Nor is the fact that they took quarter of a million

to promote pieces telling kids that if they don’t like pink they might not be a girl, or calling JK Rowling’s essay about her own experiences of male violence a ;broadside’ against trans people.

government and which is not, let alone the details of the policy capture that has happened throughout our civic institutions, much of which took place before women even knew what the fuck was happening. Because nobody bothered to remember that we were stakeholders in the

definition of our own political class.

8. Again, trans people are a minority, and women are not. Women standing up for themselves could never be doing anything ‘courageous.’ The only purpose is to ‘bait’ (he uses that twice) actually vulnerable people.

So the bottom line is this.
– Women are not oppressed and are not a minority
– Women in fact are the agents of power and the status quo
– Nothing women say is motivated by their own needs or political interests
– Everything women say about this is deceptive, manipulative and

intended to harm others
– Women are ‘baiting,’ ‘weaponising,’ ‘playing the victim,’ being ‘bigots,’ and deliberately using their massive power to persecute the ‘real victims.’