Tweets from 2003: The Gender Recognition Bill

I’m going to tweet out a few of the illuminating comments from the debates that led to the GRA 2004, to save you all ploughing through Hansard.

I’m going to tweet out a few of the illuminating comments from the debates that led to the GRA 2004, to save you all ploughing through Hansard.

One of the primary motivations (if not the foremost) for the bill was to avoid legalising same sex marriage. This featured VERY heavily in the discussions.
#GRA2004

It was, in the Govt’s eyes, FAR preferable to convert a same sex couple into a heterosexual couple via ‘sex change’ than it was to make same sex marriage legal: #GRA2004 Note how it was supposed to be only a ‘small number’.

One of the obvious flaws in the entire process was the deliberate confuscation of sex and gender. The govt admitted that the two concepts were NOT THE SAME #GRA2004

Note the NO. And then note the utter balderdash that follows. In this order:

3. Gender should be legal sex

5. Something unexplained about man, woman and male and female

To recap, sex and gender are not the same, govt acknowledges, but we’d like to create a law that pretends they are, whilst still knowing they are not. Cool.

This paved the way for what we’ve now seen evidence for: that ‘female’ people with penises can commit rape. As we now know, this happens Tebbit anticipated it, and the Govt acknowledged this would happen. #GRA2004

(What is even more disturbing is that long before the EA2010 was created, the Police were recording ‘female rapists’ by their preferred gender identity without them having a GRC. The Met started doing this in 2009) It’s like the GRA was just a foot in the door.
The govt doubled down on every opportunity to confirm that yes, criminals could compel everyone to pretend they were the opposite sex. It’s not like nobody thought this through. The Govt saw the consequences and accepted them. #GRA2004

(although again, this was ONLY EVER supposed to apply to that tiny number of legal transexuals that the GRA was meant to create) How’s that working out, do we reckon?
Several members pointed out that sex and gender were being hopelessly conflated and confused. They received answers like this one. Nope, makes no sense to us either.

Each time someone raised concerns about prisoners and gender, they’d get a response like this one from Lammy. Tiny number, hardly ever gonna happen, only certificated transsexuals. Right.

Ann Widdecombe asked a pertinent question about what happens to children affected by the legal lie. Does a mother who becomes a man render a child motherless? Check out the superb bodyswerve in this answer. Anyone any the wiser? Nor me. 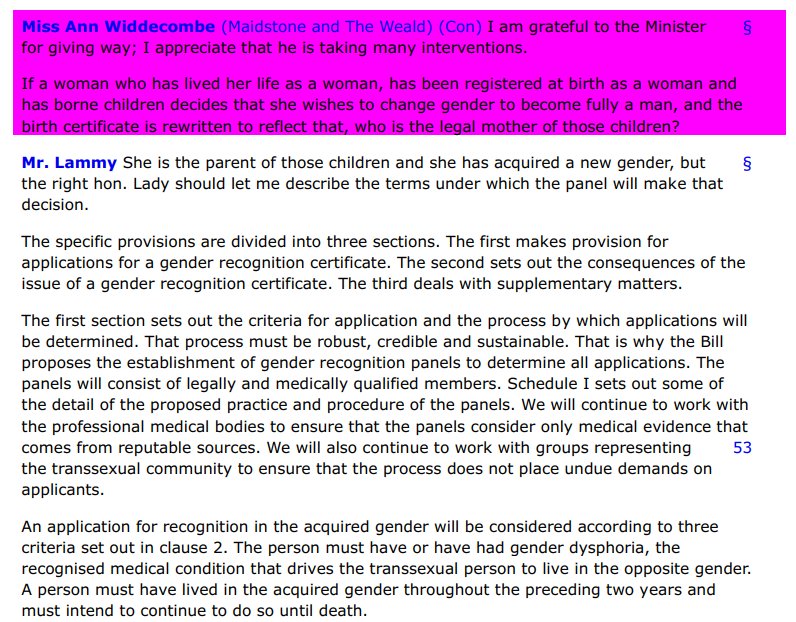 There’s one particular mention that stopped me in my tracks. Read this comment from Tebbit. He references how easily Ian Huntley dodged justice by changing ID. Urging caution with the GRA. This comment was made in 2003. 14 yrs *before* Huntley ‘transitions’.

So much contradiction from Filkin, speaking for the govt. “All I would point out is that the law is not seeking to change an individual’s sex” What happened to acquired gender becomes sex etc? “we are not seeking to bring about a gender change as a consequence.” WHAT?

“That change of gender is, however, prospective only. The Bill does not rewrite history.” Tell that to the litigious lobby busy chucking harassment charges at citizens who reference that ‘un-rewritten history’.

Lets move on to sporting issues, shall we? Prepare your hollow laughs….now Yeah, that never happens.

Lord Moynihan was an absolute trooper in making the case that this was a VeryBadMove for Sports.

In fact, Moynihan WARNED everyone that resorting to ‘testosterone levels’instead of SEX was a truly crap idea

He makes the point that the numbers don’t matter as much as the fact that it is BAD LAW. The level of foresight was impressive. Even he didn’t anticipate that this would all be extrapolated way beyond his worst fears. Not just the GRC holders…everybody.

Seems like a good point to remind ourselves that the govt kept telling everybody to cool their jets, because, seriously people, this was only ever going to involve 5000 people! No Biggie! Have some sense of proportion, folks! #GRA2004

But Moynihan got it. He knows that this will change forever the definitions of male and female, affecting everyone. He attempts to get an exemption for sports. Thanks for trying. Oh, and look. One of the precursors of Self ID. “My gender is what I say it is”. He understood.

A few other opinions from this particular day’s debate (18/12/2003) Lord Goodhart: “Of course, there are problems with the bill, some of which are relatively minor. The most substantial problem relates to existing marriages.” #GRA2004
Baroness Cathain got it. She knew this would be a legal fiction. #GRA2004

Cathain also realised that since you can’t ask to see a GRC, you can’t prove your entirely valid position of refusing someone on the grounds of sex. Leaving you open to being sued.

Sometimes whilst reading these comments, I feel queasy. Because where we are now is pretty much exactly where some people saw us going. Cathain: “A basic human right for individuals to be free to believe fact rather than fiction” “coerced, totalitarian-style law making”