I’ve had a rather disturbing epiphany after the complete patriarchal circle-jerk that #IWD2020 turned into. The TRAs are right. Trans women are women, woman is an identity, and if women have spaces then anyone who identifies as a woman can automatically enter those spaces.

I think they’re right about SdB too, and this picture is wrong (sorry @janeclarejones and #womenslib2020). While she couldn’t have predicted transactivism, I suspect that after five minutes conversation she would have agreed that both pictures reflected her thinking. 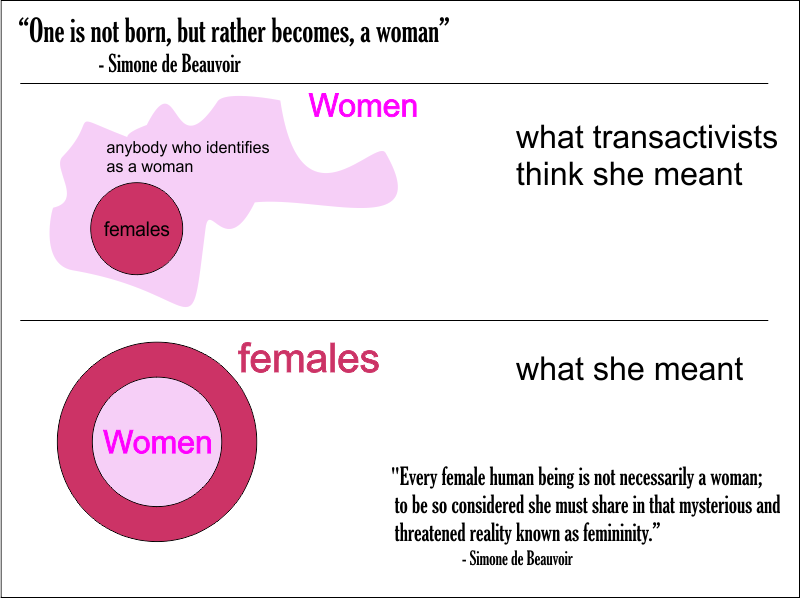 Why’s that? Because there’s a dimension missing and so my first diagram failed to distinguish between ‘woman’ as symbol and female as person (or rather non-person). This version does that a bit better. 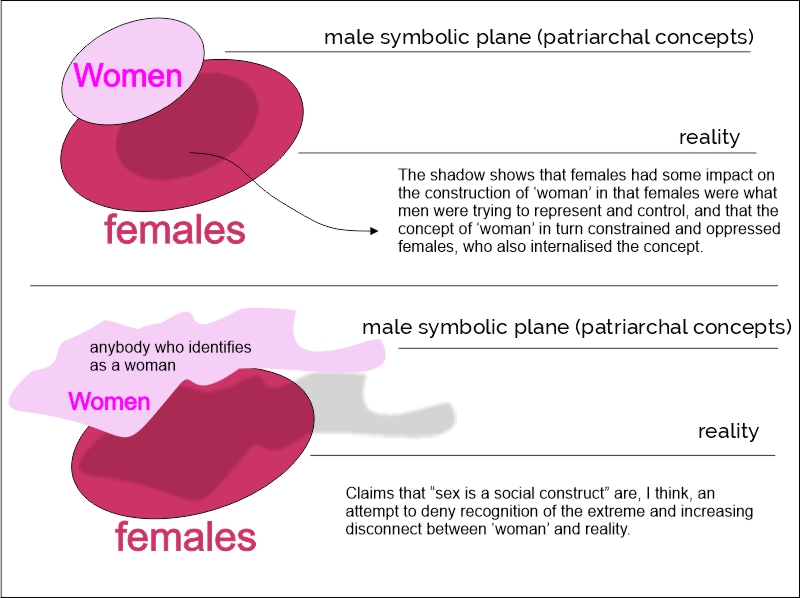 SdB understood that ‘woman’ has ALWAYS been a projection of men’s psychosexual fantasies onto us, and a demand that we live on their terms and conform to their expectations. That’s why it’s oppressive.

It’s a patriarchal symbol, not a word for an observable entity.

And it’s their concept so it can be anything they want, turn into anything they desire. They can stick sex dolls into it if they want, or girls. It’s a repository for their imaginations, nothing more. Its Old English etymology – wifman, wife of man – should have warned us.

And what’s the implication? They’re not stealing our word, because it was never ours in the first place. We don’t *have* a word apart from female (which is under threat). “Woman = adult human female” is the ORIGINAL conflation of sex and gender.

40 – 50 years ago at the height of the 2nd wave, when “women’s rights” actually seemed possible, recognising and dissolving the gendered connotations of ‘woman’ so that it simply meant ‘adult human female’, and giving that class of persons rights equal to males, seemed feasible.

This is what ‘woman’ REALLY means. Backlash. Returning females to the status of hypersexualised chattel, in the prison known as the PWPC (Planet-Wide Patriarchal Clusterfuck), aka ‘civilisation’. Nothing has changed since the Bronze Age. Nothing.

‘Woman’ once meant liberation. But after yesterday’s jeering, wanking exhibition of male supremacy larping as ‘progress’, I think we have to reject the word. #InternationalWankDay2020

This is the single thing the 2nd wave wasn’t harsh enough about. Step One needed to be: we reject your labels and all their connotations. We name ourselves.

And I’ve got some thoughts about what happens if we do that. I’m going to turn this thread and the extra thoughts into a blog post and I’ll post the link below, but I wanted to get this up to tell the patriarchy where to shove #IWD2020.

Here’s the promised blog post, which got quite long and wandered off into a theory about how patriarchy got started:

TL;DR : if we’re fighting to retain the rights we have within patriarchy, such as they are, then we may as well stick with ‘woman’. Our position should be: the language requires a word for ‘adult human female’, and that is the concept to which our rights are attached.

‘Woman’ is the best and most widely understood candidate, and we’re keeping it.

If you force us off it, we will NOT tolerate being redefined or shoved into some sort of subjective category with males. 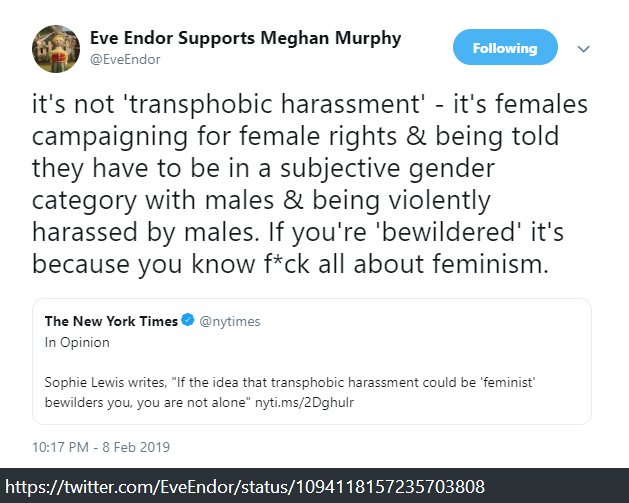 We WILL have a word which means ‘adult human female’. If you force us to pick a different one, our entire focus will be on retrieving our rights, so you can whistle for any sort of co-operation with a society which does this to us.

If on the other hand we want to have a serious crack at patriarchy, then we’re in a different ballgame. And the world’s circumstances are demanding that we look a lot deeper than just this battle.