I’m not a liberal, I’m a leftist. Although I’m also deeply anti-authoritarian and while democracy is a highly imperfect system, it’s still the best option we have, and a great better than tyranny.

I’m not a liberal, I’m a leftist. Although I’m also deeply anti-authoritarian and while democracy is a highly imperfect system, it’s still the best option we have, and a great better than tyranny.

analysis of structural inequality. They think we live in an unequal society simply because people have bad ideas or bad attitudes. Privilege has become an avatar of sin. And so the way to make the world a better place is to act like a bunch of medieval inquisitors, run around

finding sinners, and then extort performative atonement from them, preferably with as much pain and humiliation as possible.

In their worldview, the only reason someone might object to their behaviour is because they want to defend the power structure. Anyone who critiques

them will be dismissed as a sinner defending sinners. They are ‘white, rich, privileged, cis.’ They can’t know anything about power beyond their reflex to defend it. And so the writers of the Harpers counter-letter end up making the absurd revisionist claim that no white cis

intellectuals have ever had their intellectual freedom messed with, and trying to tie themselves in knots to pretend that Noam Chomsky has spent his life defending the status quo.

Their worldview is, in this sense, entirely framed by the neoliberal assumption that people are

only and could only be motivated by pure self-interest and the defence of the hierarchies that give them social power.

pseudo-Christian bunk that is playing right into the hands of the right, and is, in its own way, a mirror image of Trumpian populism, *cannot* be acknowledged.

They are the forces of truth, goodness and divine justice. Anyone who opposes them is evil.

That always ends so well.

One way to think about this is through the political compass.

It’s divided by two main axes – The horizontal axis refers to views on justice/fairness/distribution (traditionally corresponding to left/right), and the vertical axis to views on authoritarianism. 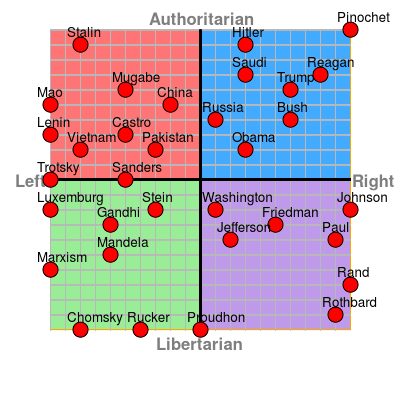 The woke left has completely forgotten about one of these axes, and refuses to accept that views on authoritarianism are an independent variable not reducible to your views on the just distribution of resources or goods.

I’ve always been over in the green bit, somewhere near, um

oh lookie (!), Chomsky. The woke left are presently hanging around in the red quartile with Stalin and frickin Mao.

Apparently we’re at the stage where if you’re not convinced the Cultural Revolution was an excellent thing you might as well be Hitler.