How do these wokesters not get that the only possible credible response here is a profound and heartfelt apology and a genuine change (like realising they have got this horribly, catastrophically wrong?)

How do these wokesters not get that the only possible credible response here is a profound and heartfelt apology and a genuine change (like realising they have got this horribly, catastrophically wrong?)

Instead we get the excuse for every abuser ever: she made me do it. Absolving the perpetrator and blaming the victim for her own abuse is not feminism, lady. It’s polishing the patriarchy’s boot so it looks really good on those other bitch’s necks.

Plus (I couldn’t read any more) there’s no doubt a diatribe in this about the “don’t judge a group by its worst members” shtick. About how we’re exploiting the few extremists to tarnish the lovely vulnerable majority, because bigotry. 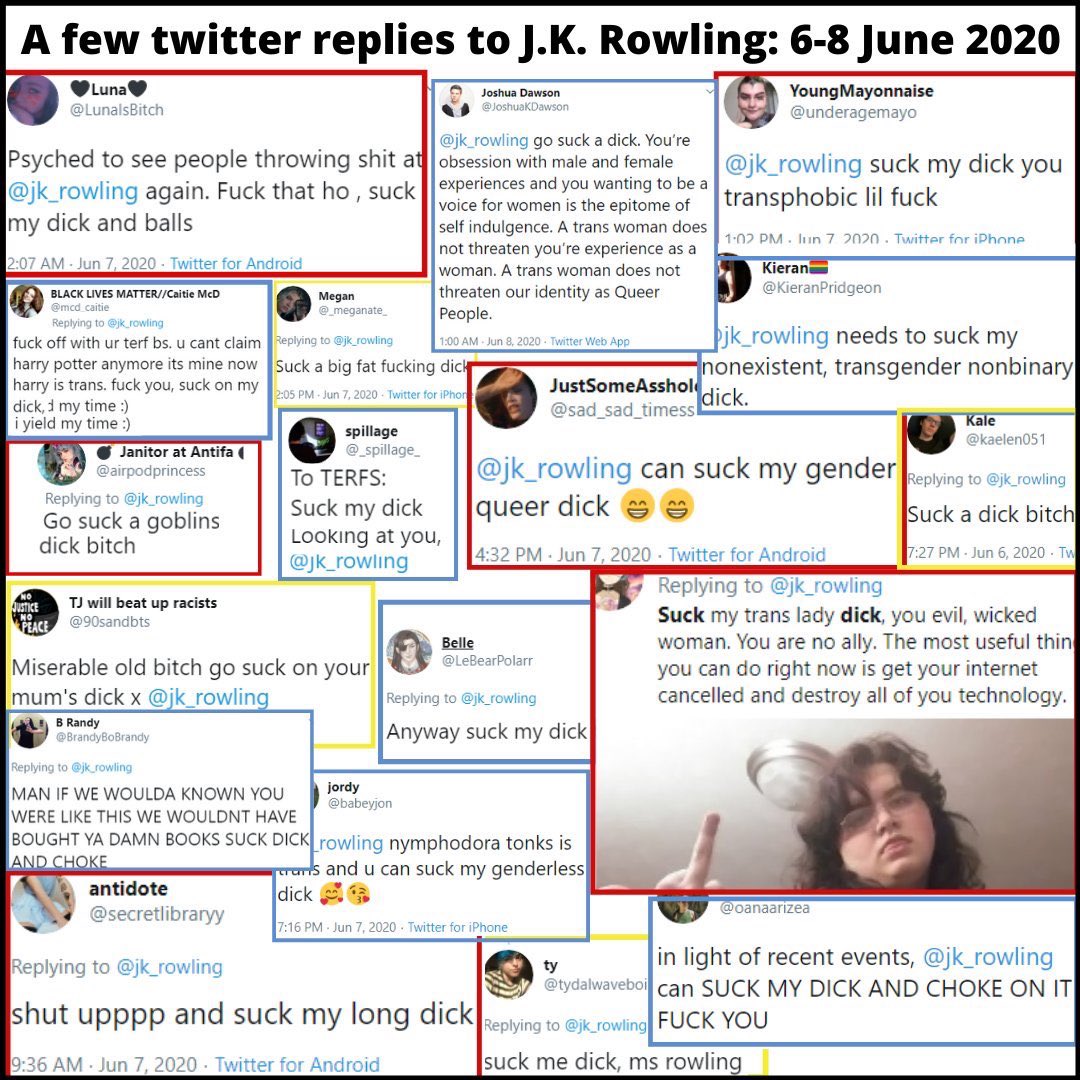 So is judging them by what their leaders and spokesmen say more acceptable then? Because they’re identical.

So is judging them by what their leaders and spokesmen say more acceptable then? Because they’re identical.

This IS transactivism. Nothing fringe about it. It’s a feature, not a bug.

This IS transactivism. Nothing fringe about it. It’s a feature, not a bug.

The most interesting to me is “Terfs, swerfs and truscum can suck my girldick” from a politician who has bravely increased transwomen’s political representation (who cares about those cis bitches, anyway?)

Who are these odious scum again?

Truscum: dysphoric transsexuals who don’t buy the TRA narrative (you know, the people the public think this movement is actually for)
Terfs: their only actual allies. Allies, not identical to. CANCEL!!!!!!!!!

Swerfs: the few women gunning for the men who actually kill the Brazilian transsexuals in prostitution that the woke love to appropriate to prop up the murder narrative.

These are, y’know, the real fash.

While the Woke Chorus stand around chanting their mantras and explaining how actually helping people is white privilege and refusing to Say The Words is why terfs are Nazis. They are Changing The World, one discursive propagandist recitation at a time.

This, ladies and gentlemen, is the Woke Left, the one which has driven half the population out in terror and disgust at its unbridled, frenzied abuse of women, and then wonders why the fuck they can’t win an election. Look in a mirror, dudes.

And god help any wokebeard who asks me why white women vote for Trump again. Any woman with her sanity intact would vote for him in preference to you, as completely and intractably vile a specimen as he is. You are worse misogynists than him, by an order of magnitude.

And this is the state of the left while the Land of the Free is executing black people in the streets. There’s no disciplined hard-arsed left to take Trump down. There’s basically no left left. People are dying with no one to defend them. But hey, nuance.

And these complete and utter arseholes are proud of this. Because they’ve managed to bully everyone else into silence with their self-aggrandising wankfest, they have no clue how depraved they look.

This is unforgivable. Shameful. An unforgettable disgrace.

I have no idea where the actual grownups are – cancelled, probably. Or emigrated to Mars. I once knew someone else they’d have cancelled in an ecstasy of self-righteous discursive orgasmic wrath, though. My dad, a (shock!!! horror!! triggered!!) white male South African.

He never banged on calling all the faintly tarnished ordinary humans Nazis and fascists, either – clearly the Unwokest of the Unwoke, the Villain of the Fucking Piece. Vile scum compared to every single one of this glorious new priesthood, of course. Subhuman. Unfit to exist.

He did, however, do what none of this sorry shower will ever come within a million miles of with their ludicrous fashionable posturing. He learned to fly aged 19, went to war, and fought them for 3 years. The real ones with guns, not this lot’s woke cartoon bogeymen.

I know exactly what he would have done with this crowd of clowns. He’d have taken one look, roared with laughter, and then he’d have court-martialled and cashiered them. Dishonourable discharge. Unfit for duty.

Take a leaf out of his book, already.

Seriously, how much more time do we have to waste on this utter fucking nonsense? Young people cowering in their safe spaces need principled leadership into daylight, not a bunch of sneering saboteurs all trying to outdo each other’s nastiness.

And how can you genuinely plan to “fight the fash” without understanding the first principle of military strategy: “Divide and conquer”? Because believe you me, your opponents do, and they are going to wipe the floor with you without breaking into a sweat.

The only people this lot are dividing and conquering are themselves, while everybody else is shielding their eyes from having to watch this completely grotesque spectacle.

They’re doing the right’s job so well for them that I would be completely unsurprised to discover that they were all CIA plants placed to completely destroy the left. They really couldn’t do a better job if they tried.

And when lifelong leftists are starting to think, “ok right wing, just take over already and end this drip torture. You cannot possibly be any worse than this”, then you know we’re seriously fucked.

It’s time to end this circus.